How much does one year of travel in Asia cost? Here’s how much I spent during one year of backpacking in Asia (Eurasia, to be precise), plus some tips on how you, too, can travel long-term on a budget.

Holy sh*t, I’ve been on the road for more than a year.

It seems like a crazy long time… but it doesn’t feel like it. The only indicators I have of my time on the road are my deteriorating English skills, woefully stained clothes, and of course, depleted bank account.

… BUT. My bank account is far less painful to look at than I thought it might be.

2020 note: When I wrote this post back in 2017, I was traveling with my then-boyfriend. We since split up—oops!—so read this knowing we were sharing costs. Traveling solo is slightly more expensive, though traveling solo on the same budget is absolutely possible. I do it now!

How much does one year of backpacking in Eurasia cost?

In that time, I traveled to 10 countries:

These countries were chosen primarily because they’re awesome, but also because they’re relatively affordable since I hold strong currencies. A month of backpacking in Armenia is going to be a lot cheaper than a month in Argentina. Just sayin’

To get an idea of just how budget-friendly these places are, here’s how much I spent in each country: A monk walking into the mountains in Kazbegi The epic spires of Goris, Armenia River next to the epic Dorud-Andimeshk train line in Iran A sunny afternoon on the beaches of Karachi The pristine Kolsai lakes near Almaty 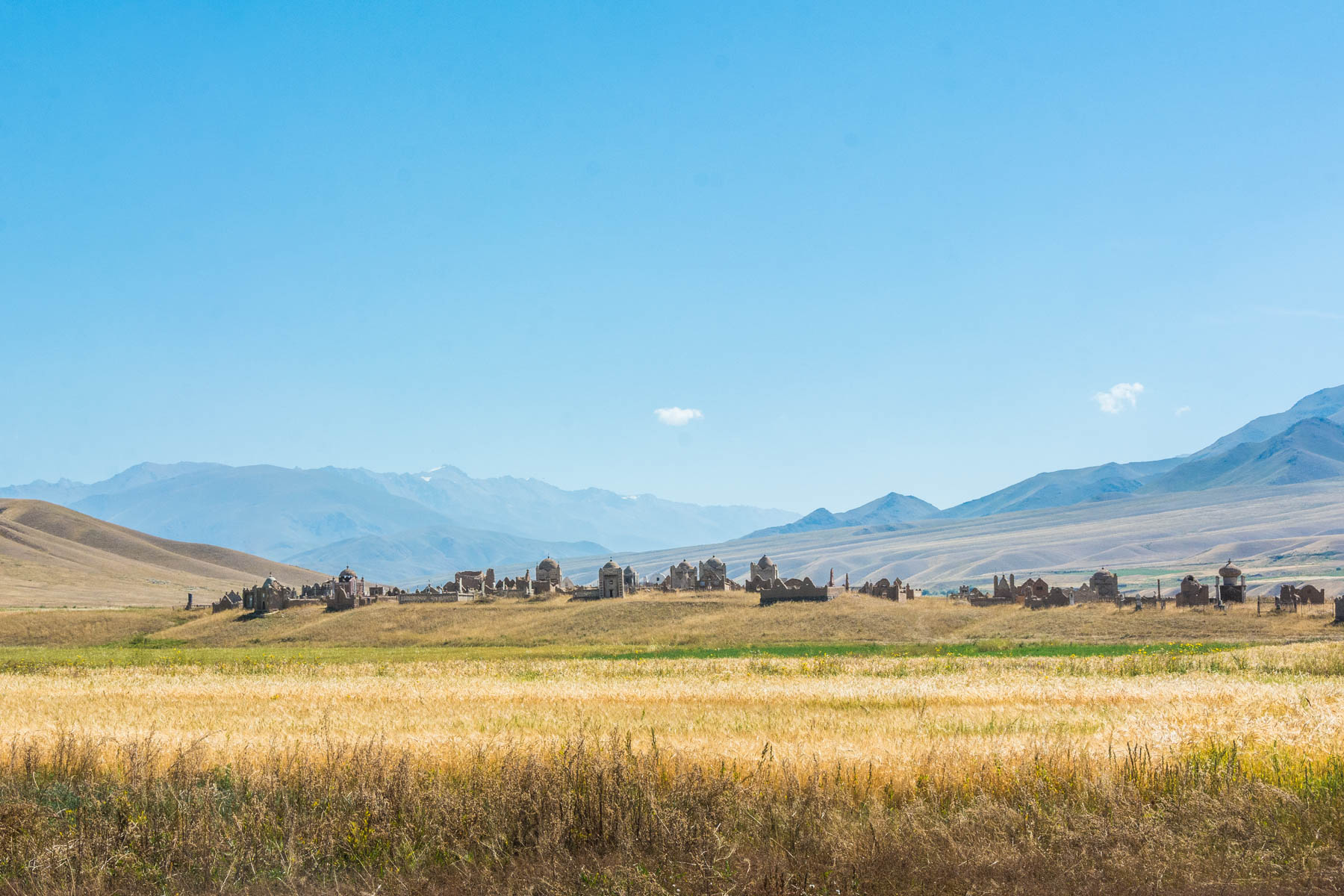 Typical Kyrgyz scenery on the way to Song Kul lake Dara-e-Azdahar, the Dragon Valley, near Bamiyan A little bit on my backpacker spending habits

For some travelers that’s a lot… but for many travelers from wealthy countries it’s definitely not.

I’m budget-oriented—hello, backpacker—but there were times when I spent more than I intended to on things like clothing and electronics. These expenses bumped up averages for some countries, but if you’re planning on long-term travel, they’re inevitable.

(Unless you’re a magician who never breaks anything nor destroys clothes, which, alas, I am not.)

Since I’ve been on the road for a while, I’m also more willing to skip out on sights I find too expensive. Many a traditional house in Iran was skipped, and I’ve walked away from plenty of sights in India out of frustration at the not-always-logical dual pricing system.

If you’re on a short holiday these sights are worth the extra buck, but I’d rather have a few more days in India than see seven traditional houses. The traditional houses of Kashan, Iran were costly for me… but I did cough up to see the bath house!

Finally, I have my vices. Every long-term traveler has their little comforts they’re willing to splurge on. Personally, I’m an antisocial cave troll who can only sporadically handle the socializing necessary for Couchsurfing.

If you’re willing to use Couchsurfing more often, you could spend a hell of a lot less money than I have. Do consider it if you’re on a tight budget… or just like meeting local travelers!

Roaming around in Palangan, Iran

The point: backpacking isn’t as expensive as you’d think

Long-term backpacking really doesn’t have to cost you an arm and a leg, especially compared to your cost of living. While living in the Netherlands, I was spending almost €2,000 a month. That’s four months of travel in India!

For me, a privileged traveler coming from the West, traveling is much cheaper than living in one place. Of course, that’s not true for everyone, especially those from developing countries with lower wages.

However, regardless of where you’re from, if you’re willing to put in some effort traveling can still be relatively cheap. Many people from countries all over the world can afford travel IF they prioritize and plan accordingly.

If you’re trying to up your backpacking game and travel on a budget more in the future, here’s my advice to you: Bazaars of bread in Andijan, Uzbekistan

Tips for backpacking on a budget

Visit cheap countries. Your dreams of wining and dining in Paris will have to wait until you’re old and rich. Hopefully.

Set a daily budget… and stick to it. Like I said, I stuck to €25/day, less in India. Once you have the number in your mind, it’s easier to make sure you stay under. Plentiful cheap pastries in Tbilisi, Georgia made it exceptionally easy to stick to our budget

Track your expenses. Try writing down ever. single. cent. you spend. It can be eye opening (and slightly disturbing at times). Being careful with spending is easier when you can see exactly where your money is going.

Travel domestically. All around the world, I meet people who  say they can’t travel because they can’t get visas… except yo. FYI dudes and dudettes: your home countries are awesome. Why not explore them, first?

Hitchhike and use Couchsurfing. They’re the greatest ways to save money and meet people at the same time. My friend Ismat, whom I met in Kabul, Afghanistan via Couchsurfing

Take photos, not souvenirs. We don’t buy stuff. It weighs us down. Photos on the other hand…

Use public transport. Forget taxis and drivers. Public transport is more interesting, anyway! Make an effort to buy the tickets yourself at stations rather than through travel agents to save more money… and have more adventures as a result.

Don’t fly. Flying is the same everywhere, and it’s costly, and bad for the environmentit’s . That’s no fun.

Use sites like Trusted Housesitters. If you’re on the road for a while, it’s a great way to find yourself a “luxurious” home base in which you can save money and lie low for a bit.

Get a tent. Once you have one, you can sleep for free virtually anywhere! Camping for free at Fairy Meadows in Pakistan

Be nice to people. You never know when you’ll meet a friendly soul willing to host your sorry backpacker ass.

Eat (too much) bread. It’s filling and cheap. Don’t blame me when you get scurvy, though. The inside of a marshrutka minibus in Kyrgyzstan. One ride costs less than $0.25!

Want to know more about my epic journey? Here’s what Lost With Purpose is all about.

There are some seriously awe-inspiring locations in this post that have me going ‘ooooh’ as I read! What a great summary of your travel expenditure and a helpful reminder of how you can make your trip a reality by careful budgeting.

Wow, I can’t believe it’s been a year already! I just found your blog a couple of weeks ago and have been slowly reading my way through all your posts from the beginning – you’re both really great writers and your photographs are always evocative and make me feel like I’m right there with you exploring Asia. I hope your next year of travels will be equally as amazing as the first one – happy travels! 🙂

You’re too kind. Thanks for following along.

I love your post, all these countries are usually forgoten by people but the nature looks stunning! It is definitely on my bucket list to go to lot of these countries. Thank you for the great report!

Loved the post, I am Asian (Indian) and there are still so many of these places I would like to visit. Ps: the photograph of karakul lake is stunning!

Thanks a lot. You live in a stunning country too, so much to see.

Great post! And very useful since you went to many places that are on my list 🙂
I do also believe that traveling can be cheaper than staying at home, specially while traveling to cheap countries. And I feel the same as you, after along time on the road I just skip expensive sights and activities.
Stunning destinations by the way!

Thanks a lot. Glad it’s useful.

Thanks a lot. Which if the countries is top of your list?

I’m not sure if Mongolia counts, but that. If it doesn’t probably Tajikistan. Or kyrgyzstan.

Wow! That’s awesome. I have traveled extensively in India but couldn’t travel on Budget as we find flight tickets very expensive and it costs 40% of our total travel expense.

Why didn’t you use the train?

Great post! Thanks for the awesome pics and tips! Central Asia just got higher on my wishlist 😀

Thanks a lot. We highly recommend it!

In hotter countries (Iran, Pakistan, India), do you always opt for (private) accommodation with air-conditioning?

We usually take private rooms, as dorms are often terrible value in these countries. We don’t usually take rooms with A/C, although in Pakistan it was so hot that we sometimes did.

I’ve never done couch-surfing but I’m with Alex on this one. I’m not always sociable but I would consider it if only for the experience (and to save money).

CS is a great way of meeting people, too.

Wow thanks! Your posts are really inspiring! Love the photos. Definitely gonna see more of Central Asia.
I’m going to Iran in a couple of days from now!

Hi Reyhan, thanks for letting us know. Iran is great, we’re sure you’ll love it. Let us know if you have any questions. Cheers!

Hi, thanks for letting us know. We’ve deleted the link in your comment as we don’t see how it’s relevant.

Hey Sebastiaan, dam good man, One year in Asia for less than $10,000!! its unbelievable. I had gone through your blog and saw that you have also gone to Iran, well that’s my place. What a superb description you have given on your spending for each place, really amazing. Really other people can get good information about planning their next trip. Well best of luck to you too for your next trip.

Hi there, great to hear you liked the article. One of the things that annoyed me when researching this trip was the lack of info on costs. Hope this an help other people with their budget planning.

Can I just say it is all amazing and i encourage all that.. HOWEVER when you are on your own, and a lonely female ie. safety matters too, these costs may double – a room for a couple often costs the same as for one person.. so sadly when you – like me – have no choice but to go to these places on my own (or not to go) then costs are a bit different :/

Update to my comment – sorry not managed to look through your amazing blog in full just yet! – you say Iran prices are per room! Yes at least Iran has some single vs coupled equality.. 😀