Tatev is probably the most famous monastery in Armenia. Below you can find a guide to Goris and visiting Tatev monastery.

Goris is quite possibly the most stunning city in Armenia and is the base from where to travel to Tatev monastery. The city alone is nothing special–it’s all about location, location, location. The city is encircled by mountains, some of which rise up right from the city’s perimeter.

Below you can find a guide to visiting Goris, Armenia. This guide to Goris includes things to do in Goris, where to stay in Goris, and how to get from Goris to Tatev Monastery.

Goris from above, a most acceptable view we’d say.

Things to do in Goris, Armenia

The mountains around Goris are covered in towering limestone spires, chock-full of cave dwellings. The cave-city complex is known as “Old Goris”, as the caves used to serve as homes until the 18th century… or so the guides say. Though many of the caves are now bare, there’s still a decent number of resourceful people that have built modern day houses up against the spires, so they can continue to make use of the caves. You can literally see the past meeting the present as you wander throughout the rocky outcrops. You can easily spend an entire day just wandering among the rocks along the edges of the city. We did encounter some kind of marked path in one or two places, but it’s not really necessary. There are ridges to troop along all over the mountainsides, thanks to years and years of people and various hoofed creatures wandering along the slopes.

Checking out the abandoned cave estate. Could work with a little TLC, but the ceilings were a bit too low for modern-day humans…

Be careful running around on the top of the mountain–it’s a steep drop, and there’s not much in the way of decent paths once you climb up high enough.

Pro tip: if you have a chance to buy a bottle of wine while passing through Areni, home of one of the oldest wineries in the world, save it for Goris and go for a super epic picnic atop the mountain! It’s a great (and cheap) way to spend the afternoon. Just be careful not to fall over the edge when you’re stumbling down the mountain 😉

An epic picnic for an epic location. And by “epic picnic”… we mean wine and pretzels. We are on a budget, after all! Wine-ing and winding our way down the mountain.

Visit the museum of Axel Bakounts

Granted, we don’t really go to museums much. But if you’re interested in Armenian poetry, this museum might just be for you. Axel Bakounts was a controversial figure, spending time in jail for his mocking of the mayor of Goris, and ultimately murdered in 1937 by Stalinist’s. His museum is set in a lovely villa with a timber veranda.

Tatev Monatery is Armenia’s most famous site–an old monastery on a plateau overlooking a vast gorge. Many people solely travel to Armenia to visit Tatev monastery.

Some quick facts: its construction began in the 9th century, it used to house one of the most important medieval monasteries of Armenia, and is now marginally more famous because it’s at the end of the longest cable car line in the world, which clocks in at 6 kilometers.

The view from the Wings of Tatev, the longest cable car in the world.

But all you need to know for now is that Tatev is most definitely, undeniably, the tits. I’ll let the pictures do the rest of the talking. 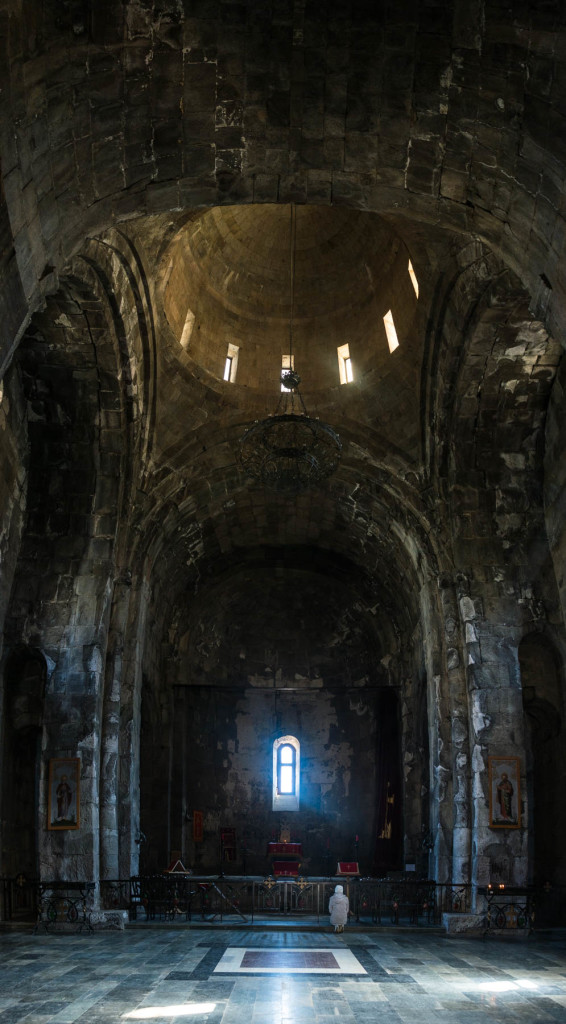 A moment of serenity inside Tatev.

How to get to Tatev Monastery from Goris

To get to Tatev, we recommend you take a taxi to the Wings of Tatev, the Guinness World Record-listed 5.7km cable car starting in Halidzor. It’s also possible to take a car/taxi up to the monastery, but the cable car offers much more epic views… and cheesy music combined with overly posh British narration as you soar through the skies.

Getting back to Goris from Tatev

We opted for a one-way ticket and hiked most of the way back to the base station of the cable car, from where we took a taxi back to Goris. The walk was a very hilly and zig-zagging 10km. If you’re walking, be sure to stock up on water before embarking on your mountainous voyage. We forgot to (derp), and it was a struggle.

Taking in the view? Or exhausted from dehydration? You decide.

The walk, though long, is worth your while. You pass a series of pools near a feature called Devil’s Bridge that you can theoretically swim in (if you dare). You’ll also get a view of some abandoned monastic cloisters, and pass a Lord of the Rings-like watchtower atop another mountain.

Nothing like crystal clear, scum green water to take a refreshing dip in, eh eh?

The views from the watchtower, about 3/4 of the way back to Halidzor, are epic, and completely justified our trek. Not that justification was necessary–we’re die-hard hikers, so walking that far was no big deal. /sarcasm

The Harsnadzor watchtower, with clear views to Tatev. Not sure if necessary given Tatev’s strategic location, but so be it.

If you’re not interested in the long slog back, just lurk for a while around the Tatev complex. As the day goes on, there will be a decent number of taxis driving to/from the area, as well as a few enterprising Armenians that will be happy to pretend they are taxis for a short while.

Goris and Tatev are definitely in my top three favorite sites of Armenia (the other two being Haghpat monastery and Yerevan, Armenia’s capital city). If you ever visit the country, make sure to make the time stop by–you’ll be glad you did.

Where to stay in Goris, Armenia

Goris is a great base to visit Tatev monastery from. It’s also in a beautiful location, and we recommend taking a day or two to relax and enjoy nature.

And so end our guide to visiting Goris and Tatev Monastery. Let us know in the comments if you have any more questions. Yay transparency! There are affiliate links in this post. If you book a stay after clicking on one of the links, we get a small commission, at no extra cost to you. Think of it as a way of supporting our blog!

I’m one of the Peace Corps volunteers living in Goris, or as we say, winning the PC lottery. 🙂 It is beautiful here! One thing, Goris actually is special in itself, as the architecture is unique to Goris. Perhaps you noticed the amazing masonry detail, with every rock outlined in mortar, and the red metal roofs. The “new” town was designed by a German architect in the 1800s, making it Armenia’s only planned city. I’m wondering what kind of camera/lens you used to get those amazing wide angle shots. iPhone?

Getting to live in Goris definitely doesn’t sound too shabby! Curious as to what locations people consider to be “losing” the lottery (if you’re comfortable answering)? We did notice that Goris adheres to much more of a sensible grid system than in other cities, so that’s very interesting to hear.

As for the photos, I use a Nikon D7100, always with an 18-200mm lens. It has wide angle and light telephoto abilities 🙂 For the panoramas, I stitch several images together using Adobe Lightroom.

Hi! there. A couple of queries that I can use your help with regarding our visit to Armenia (and subsequently Goris) next week. I was quite enchanted by your trek down from Tatev Monastery and we want to attempt the same. And hence these questions. 1. How long did it take you to reach Halidzor on your trek back? 2. Is the path back easy to follow, or the likelihood of getting lost (not the enjoyable kind like when done on purpose) and stranded, high? We plan to travel back to Yerevan via public transport and so don’t want to jeopardize our chances of taking return transport. Thanks and regards.

Hiya. Reaching Halidzor took around 2-4 hours (we’re not entirely sure anymore), walking along the road. Make sure to bring enough water, as there aren’t many shops. The is a road that snakes down, up, and around, and if you follow this you’re not likely to get lost. You might be lucky enough to get a lift, although it’s not uncommon for people who picked you up to later tell you they are a taxi. It’s a nice enough walk, and the lookout tower offers a great view of the valley.

Gee! Thanks. You made it easier to understand the daunting task ahead. Will pack a small picnic as well. Was hoping it wouldn’t be more than 2 hours, but hey will try and attempt it for as long as we can and when we can’t anymore will hitch-hike, even if it turns out to be a taxi. I am sure it will be lesser than what they charge at the top….(may end up saving some AMD) hopefully. What say?

That sounds about right. Just remember that there’s always a chance traffic is slow, though.

Will keep that in mind. Thanks a ton for your thoughtful and immensely helpful tips. Can hardly wait for the adventure to begin. 🙂

Thanks so much for this post. I am planning a trip to Armenia next year. Was looking at doing a day to of Tatev from Yeravan, but after reading this think I will public transport to Goris and stay a few days. Taxi to the cable way and do it myself. Think this will even work out better priced than doing a USD$150 pp day tour. Thanks!

I read about Goris in Galina Vishnevskaya’s awesome autobiography. Evdiently her group was treated well during their stay (1965 ?). What a precious place ! Thanks for the write-up … and to all those in the region, sorry for the US involvement in destabilizing the region via the CIA and the NED.
DON- activist in Fort Lauderdale