The World Nomad Games promises all of the epic nomadic action you’ve only ever seen on National Geographic. But, as we all know, promises and reality are not always one and the same.

If you’re like me—that is to say, overly skeptical—you might be a little dubious. The Games sound like they could be intriguing, but they could also be a huge tourist trap. I thought the same before attending the 2016 World Nomad Games in Kyrgyzstan, and went in expecting the least and planning to only stay for a couple of days.

Oh, how wrong I was. Are the World Nomad Games worth the trip? Heck yes they are.

What I got: An ever-surprising, action-packed, Central Asian festival.

Each day was filled with masterful stunts on horseback, insanely photogenic everything, and hospitable nomads delighted to show off their culture. I was satisfied, to say the least.

But don’t just take my word at face value: here are 5 reasons you need to visit the World Nomad Games. 5 reasons you need to visit the World Nomad Games

1. They’re not a tourist trap.

Okay, the World Nomad Games are intended to attract tourists and boost tourism in their host country. But that doesn’t mean you’ll be drowning in a sea of obnoxious foreign tourists! I spy with my little eye… plenty of Kyrgyz tourists!

There were far more Kyrgyz people than foreigners at the World Nomad Games in 2016 and 2018. Spectator and performer alike were excited to show off their culture, and oh were they a sight to behold.

Plenty of nomadic families rolled in to set up yurts near the event. Men and women donned traditional clothes. Many a spectator were on horseback. Young, aspiring eagle hunters wandered through the crowds with tiny eaglets in tow. Talk about the best seats in the house! Make room for the eagle, man.

2. You’ll see all kinds of crazy things hard to find elsewhere in the world.

Let’s be real. Where else can you see sports involving headless goat carcasses, horseback wrestling, mounted archery, long-distance racing, and eagle hunting all in one place?

Headless goat sports, anyone? This popular nomad sport is known as kok buru in Kyrgyzstan.

What about massive yurt camps filled with people in nomadic garb?

And most importantly, endless quantities of nomad noms?

I was invited into this yurt to come check out the food… which all turned out to be free!

How about event venues in jailoos, soaring alpine pastures, surrounded by mountains?

This will do just fine.

Or sports arenas on the shores of one of the largest lakes in the world?

No, your television does not count.

3. The World Nomad Games are cheap.

It seems a bit odd that such a big event would be so cheap to see, but that’s the truth! The only events you needed tickets for were the opening and closing ceremonies. Everything else was ticket-free. There was a free shuttle system to the major venues, and people were all too happy to treat you to all kinds of delicious (and usually free) goodies in the cultural camp. Free plov, made right there on the spot!

On top of that, Central Asia is a relatively cheap place to travel in for both backpackers and traditional holiday goers. You can have…

Don’t believe me? My budget report for Kyrgyzstan is proof.

4. The World Nomad Games will only get better.

At the 2016 and 2018 World Nomad Games there were yellow-clad volunteers galore, ensuring attendees had as smooth an experience as possible. They spoke a variety of languages, from English to Russian to Kyrgyz to French, were happy to show people around (and translate!), and were well informed about the schedule… when possible. This friendly volunteer, Sergei, took us around and introduced us to locals all throughout the various camps.

But, to be honest, being well informed was easier said than done. A definitive schedule was the only thing missing from the World Nomad Games… and it led to a lot of confusion.

Is this kok buru match between Russia and Kazakhstan or America and Kyrgyzstan? Are the eagle speed trials today or tomorrow? Participants from 40 countries attended the games in 2016. Who knows how many countries there will be in 2018?

Part of it was due to a bit of bad weather at the start, and part of it was… well, typical Central Asian planning (or a lack thereof). Very official: taped paper signs on one of the sporting halls.

In the end, it wasn’t a big deal—there was always something interesting going on, though it wasn’t always what you expected. On the positive side, volunteers were constantly surveying attendees on how the event could be improved. Expect much improved organization and infrastructure in the future!

I’ve touched on this already, but it needs to be said again.

I won’t even bother trying to put words to this. Just take a look at these photos and see for yourself:

Young girls in costume at one of the (free) opening ceremonies

A yurt camp showing off the culture of the Talas region of Kyrgyzstan.

Getting lost in the haze at one of the opening events Cooking up some borsok, a popular Kyrgyz snack made from fried dough squares. 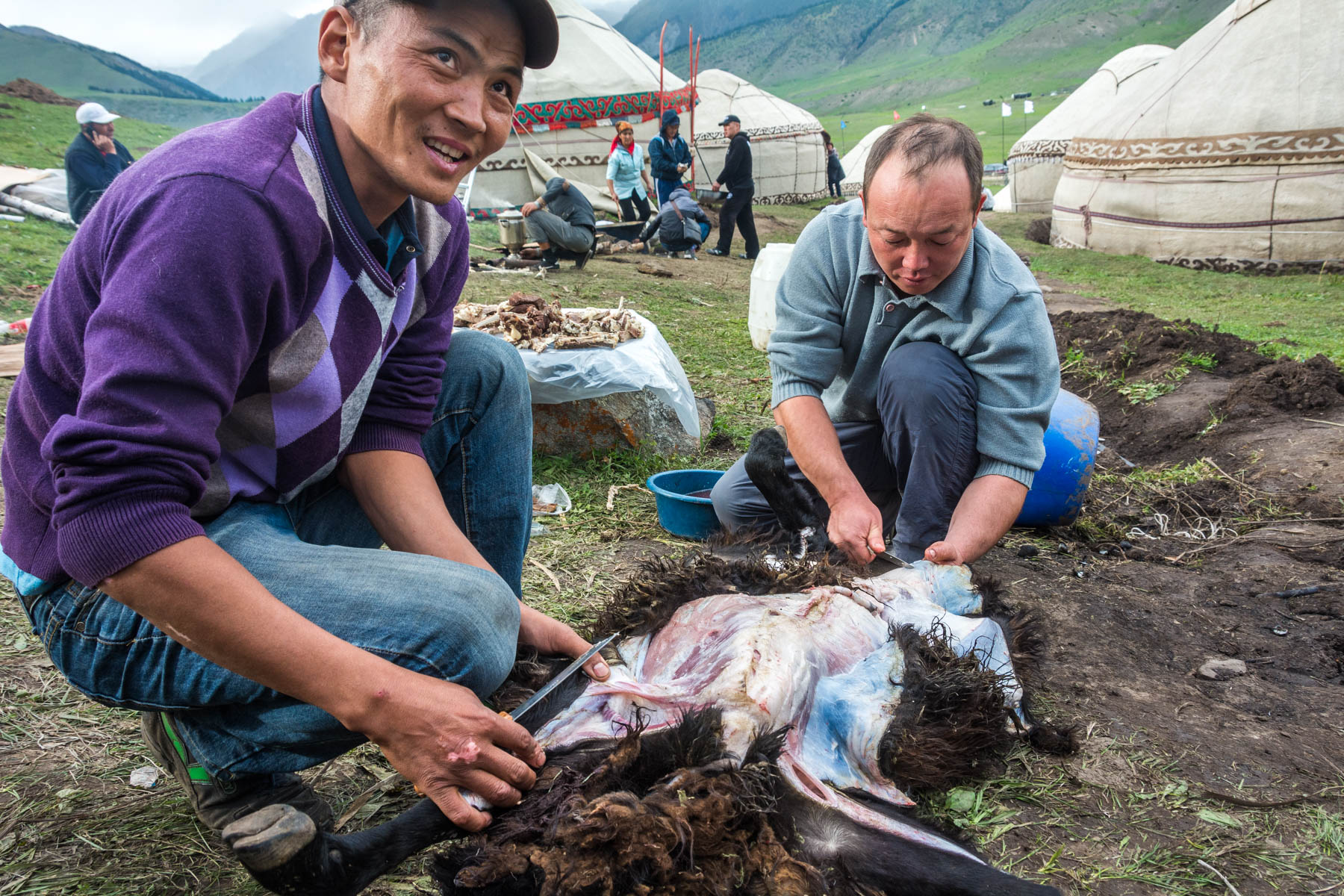 These guys insisted I come back the next day to barbecue the sheep with them.

But really, how beautiful is this?

When are the next World Nomad Games?

And, of course, keep on watching my blog! I also want to check out the next World Nomad Games. Maybe I’ll see you there? 😉 We are really keen to go but have to be back in the UK for Friday evening. Is it still worth going?

I don’t think you need to stay for the entire festival to have a good experience – several days will be enough!

Hi, does anyone have advice on where to stay for the 2018 World Nomad Games? Thanks

Everything sounds interesting but I am a bit apprehensive about visiting the event since it involves killing of goats and eagles just for fun. Please let me know your thoughts on the same.

I appreciate your concern Parita. For the record, no eagles are killed for this event, though they are taken into captivity for sport which is certainly an ethical concern.

Regarding the killing of goats, I think it’s important to consider the culture—nomadic cultures typically rely on meat as a main source of nutrition, since their lifestyles do not allow for cultivation of vegetables/other produce. Basically, they have to eat meat! If you are easily upset by seeing butchered meat I might be cautious, but otherwise, in Kyrgyzstan at least people understand that some people do not eat meat and do their best to respect and accommodate people’s dietary restrictions.

Does anybody have any info about the next event taking place in Bursa, Turkey?
I want to purchase a ticket or find more info but nothing comes up.

hi
i want to go to the next World nomad games, do you think that’s possible in 2021 ? is it this year organized in Turquey?!
thanks for your return please
stephane from france