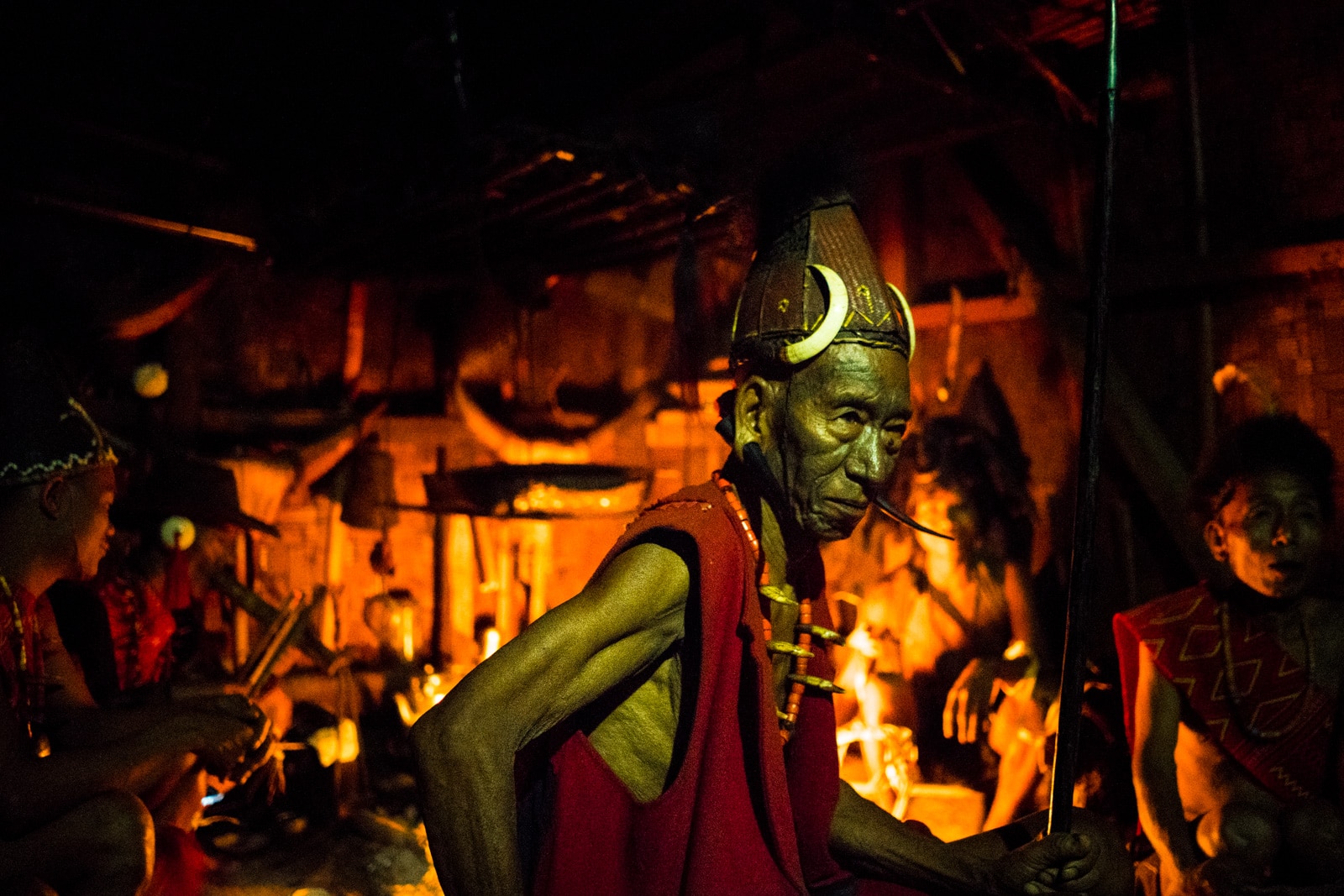 Sometimes, weird situations lead to awesome pictures… like these photos of traditional tribal culture in Longwa, Nagaland in Northeast India.

I couldn’t dream the scene before me if I tried.

Night has fallen on the bamboo longhouse of Nyakto, our crazy host in Longwa village, Nagaland. Multiple men dressed in warrior attire squat around a fire to smoke and cook opium. Large cameras are scattered across a table, one set up on a tripod to film what is supposed to be an interview. Nyakto’s father, Yaowang, one of four remaining headhunters in Longwa, is in full regalia. Despite the getup, he mostly looks confused as Apang, a local Konyak guide, attempts to translate interview questions. Yaowang is woefully deaf, you see. Some of the other men around the fire periodically chime in with their own translations and embellishments to the questions and answers, shouting over each other to ensure they’re heard by the patriarch. A dozen children lurk in every crevice, watching with wide eyes as they chatter with each other. At the center of the stage is Jorge, drunken Chilean director extraordinaire. A furry headhunter headdress sits atop his hair, and what can only be described as headhunter bling—a necklace of four carved metal heads—hangs around his neck. He’s been polishing off a 1-liter water bottle filled with whiskey throughout the evening, and is completely and most utterly intoxicated. The artist on a later day, sadly sans-furry hat and bling.

“Look at this shot. I am such a good director,” he slurs to me at one point, motioning at his expensive camera’s screen as he films nothing particularly remarkable. Most of his evening is spent asking Yaowang biased interview questions, in between attempts to quiet the village peanut gallery (an entirely impossible task).

Amusingly enough, Jorge is the reason this whole scene is taking place. Lights, camera… wait, what are we doing?

Earlier in the day, Jorge came to the village to film Longwa’s culture and traditions as part of a larger documentary about tribal culture… and word got out that he was offering money to his film’s participants. Originally, the plan was to film Nyakto, Yaowang, and another elder tribesman, but a handful of other men appeared, dressing up and waffling about as Jorge tried—and failed—to make the crowd do something coordinated and/or exotic. “Look fierce! With passion!” Jorge says… to little result. Note the man in tribal gear + boxer shorts in the background.

Eventually, the sun set, and Jorge moved the show indoors to our current spot by the fire to film the interview. As the chaotic shouting and chatter continues, Jorge grows increasingly frustrated.

“They don’t know what they’re doing, see. They’re just a bunch of junkies.” His derisive words drift through my ears as his woefully toxic whiskey breath wafts through my nose.

As if the irony wasn’t enough, Nyakto, our opium-addicted homestay host, stalks past irritatedly. He makes a crazy motion with his hands, “Drunk. He is not a good man.” He continues to grumble as he disappears to the kitchen area to shout about dinner.

You know you’ve gone wrong when you’re so intoxicated it upsets a man high on opiates during all waking hours of the day. Though the documentary filming was contrived and chaotic at best, it was still a good chance for us to see the colorful Longwa tribal culture on display. Over the course of two days, we were treated to dashing sashes, headhunter tales, and chants galore. It would be a shame not to share some snippets of what we’ve seen, especially as Longwa’s headhunter culture slowly makes way for contemporary Christianity.

Without further ado, here’s a photographic peek into the culture and traditions of Longwa village, Nagaland. Tribes in the hills of Nagaland were isolated for a long time. People did not visit each other’s tribes, aside from when warriors were sent to fight as a means of settling disputes. Most tribes in this region fall under the umbrella of the “Konyak” tribe, but each village identifies as their own tribe. Longwa village, Longwa tribe, Longwa language. In the days of yore, the head warrior of the tribe would fight an opponent, aiming to kill and bring back their head. Once they did so, they were tattooed on their face and body as a sign of accomplishment. Facial tattoos were given for the first head, and body tattoos for subsequent conquests.

There are only four true tattooed headhunters left in Longwa. Yaowang (rightmost), Nyakto’s father, is one of the four. He took two heads back in the days of yore, as you can see by the fading tattoos on his face and chest. Though the headhunting tradition won’t be passed on to future generations, the kids in Longwa are still fierce… and armed with little bamboo guns! (They really do work, and they sting a lot more than you’d think.) Watch out for them—they’re feisty, enjoy harassing foreigners, and they come in groups! One of the reasons the children are free to roam and get into trouble is because the local women are too busy working to keep track of them all. Like many women in this part of the world, Longwa women are responsible for planting and harvesting, as well as running the homestead. Traditionally, women to work together to grind the rice they harvest. They work in pairs, alternating pounding rice with long, heavy wooden pestles, and sing songs to help stick to a beat… and keep from crushing each other’s fingers! In actuality, the young daughters of the family are the ones who pound rice all day (and night), but for ceremony’s sake, the matriarchs of the family came out to demonstrate the tradition in their tribal best. After getting a good beating, they sift the ground rice flour through baskets to remove husks, uneven chunks, and ensure only the finest grains are collected. Unfortunately, while women labor away, it’s common for men to simply sit and smoke opium. Neighboring Myanmar is the second largest opium producer in the world, and the drug readily flows over the porous Indo-Burmese border that runs through Longwa. More than 1/3 of Longwa’s population is addicted to opium. But opium is just one force chipping away at Longwa’s tribal culture. Many young men sit and smoke all day… but many more are turning to God. Almost all of Longwa’s population has converted to Christianity, and the local church discourages any references to past headhunter culture or traditions. There’s no knowing what Longwa will look like in 10, 20, or even 50 years. Every day, modern ways of life erase tiny bits and pieces of cultures around the world, and Longwa is no exception. One can only hope their tradition will not die with the last headhunters. But only time will tell. Want more on Longwa? Don’t miss our crazy stories about what actually went down in Longwa village.

6 thoughts on “Headhunters and ricebeaters: snapshots of tribal Longwa culture”

Wow. Very strange and interesting. Loved the photos and commentary. Just by looking at the photos, I would not believe this was India. Thanks!

Thanks for letting us know. Glad you liked it.

Your portraits are fantastic, really great work. Regarding the “ceremony”… yeah, maybe a slight part of what you saw was once in their culture, but don’t you think that the fact that they were being paid to be “exotic” could have exaggerated their real traditions? I don’t know, I have come to the point of being skeptic about what “traditional” means anymore… Anyway, loved the your photographic report!

We actually mention that in the article. We literally say it was contrived and that they were performing a little show. Also, their real tradition was cutting people’s heads of as a trophy, and we’re sort of relieved we didn’t get to see that.

Very interesting and nice post. I love the photos, they look stunning. One of the most amazing things about traveling is being able to watch parts about the culture and traditions.

Glad you liked it 🙂