We’ll get to the point: Georgia is freaking amazing. Need proof? Here are 16 photos to convince you to travel to Georgia.

Mention travel in Eastern Europe and most travelers think of places like Albania or Romania. Little do they know what they’re missing! A tiny country at the crossroads of Europe and Asia, Georgia is an incredible destination that doesn’t get nearly as many tourists as it deserves.

Below you can find photos of Georgia that proof you need to visit this country ASAP.

16 photos to convince you to travel to Georgia The vibrant interior of Gelati monastery, one of Georgia’s most colorful. Many of the Orthodox monasteries in Georgia are adorned with frescoes dating back hundreds of years, but Gelati’s walls are by far some of the best-preserved. We see how people are so religious in Georgia–it’s hard to think evil thoughts when all of those painted eyes are watching you… A must-have in Georgia: Adjaruli kachapuri. We dubbed it the “breakfast boat”. It’s a massive piece of bread filled with melted cheese and an egg, topped with butter just in case your heart hadn’t given up already. A monk walking into the mountains in Kazbegi. Georgia’s snowy mountains are adored by hikers, skiiers, and simple wandering noobs (read: us) alike.

Convinced yet? Check out these 50 things you need to know before traveling to Georgia! The bizarre Alphabet Tower of Batumi, Georgia’s most popular beach town on the Black Sea. Its odd combination of old and new architecture is definitely a sight to behold. If the Georgian alphabet is proving a tough nut to crack, you could always sit and stare at this tower for a while. Osmosis is a thing, right? The ancient cave city of Vardzia, near Akhaltsikhe. It’s a verifiable maze of living spaces and wineries cut into the rock, with a monastery hidden away in one of its deepest recesses. The monastery is still in use, but the rest of the caves are empty–possibly the consequence of living on the side of a cliff without any railing to protect the kids from falling off? A 12th-century winery and academy near Telavi. Georgia has claims to some of the oldest remnants of winemaking in the world, and its residents are only too happy to let you partake in that little bit of history. As one charming Georgian grandmother put it: “Real men drink 4 liters of wine in one dinner.” Challenge definitely not accepted, Grandma. The peaceful streets of Tbilisi’s old city, a charming blend of peeling old buildings, twisting alleys, and young urbanites on the prowl for their next shot of chacha or three. 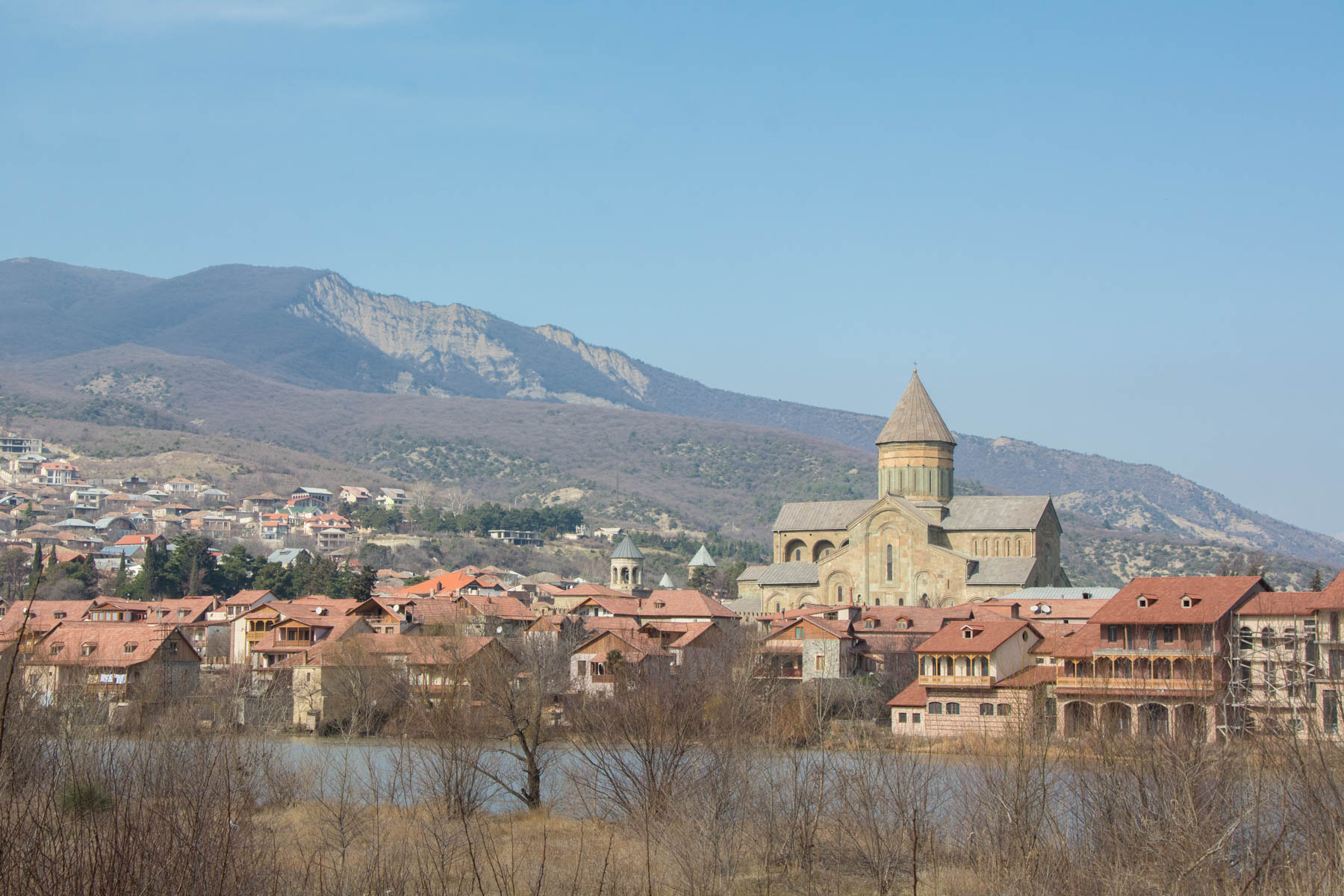 The tiny town of Mtskheta, the birthplace of Christianity in Georgia–300 A.D. baby! A place of pilgrimage for Orthodox Christians and/or the billion and one young Georgians lining up to tie the knot at its cathedral. Sunrise over super chillaxed Kutaisi, a calm (and cheap!) city in the hills chock-full of beautiful monasteries. Sipping wine in the warm sunshine–what more could you ask for? The lush botanical gardens of Batumi. Aside from the colonial undertones (it was built by a Frenchman with far too much money back in the days of yore, like many things in life), the gardens are filled with plants and trees from all over the world, and are sure to satisfy all of your treehugger and botanist travel companions. The looming Svan towers of Svaneti, Georgia. Back in the day, families under attack would run to the towers for defense, shooting at their attackers from above. Apparently they never considered the small design flaw of being put under siege, but they do deserve some credit. The sun rising over Gergeti monastery in Kazbegi. It’s the most famous (and most photographed) site in Georgia, so h’obviously it had to make an appearance. Cliches be damned. The painfully adorable hilltop town of Signagi, our favorite town in Georgia. It has cobblestone streets, gets plenty of sunshine, and being in the middle of Georgia’s wine country, it has a billion and one places to drink lots of wine. Could it be any more perfect?

Convinced you have to visit Georgia yet? Check out my guide with everything to know before visiting Georgia for more info! I am definitely convinced to head back there soon! Great pictures 🙂 I never made it to Signagi, unfortunately, but it is there waiting for me 🙂

Hi anyone. 72 yo Aussie male . Walked 650k of the Camino Frances in 35 days, Autumn 2016 and getting the same feelings for Georgia. Are there similar walks (not packages)in Georgia for a budget conscious Hiker. I do need a bed and regular food (and wine) but otherwise pretty easy going.

I don’t have a specific answer to your question (though I promise there will be wine). However, I do know Caucasus Trekking is a great resource for all things wondrous and walking in Georgia. Check this: http://www.caucasus-trekking.com/best-treks

Definitely will to go back and tour more in Georgia to bring my family. Love the foods so healthy and reasonable price and wine so wow👌🏻❤️Ofcorz to play in snow again😂

I’ve been in City of love where is the SIGNAGI but wanted to go back as well for winery places which i missed.

Now ? Can americans go to georgia now on vacations?