A quick guide to everything you need to know about doing drugs in the Netherlands safely and responsibly. Covers the most common drugs: weed, ecstasy, and truffles (mushrooms).

Going to the Netherlands to smoke some weed, but not quite sure how to go about it? Check out this coffeeshop themed walking tour in Amsterdam.

This is somewhat exaggerated—there are no magic gnomes, for instance—but drugs are everywhere in Dutch nightlife.

Many people come to Amsterdam for hedonistic purposes, and that’s totally fine! Get it in while you can: the municipality of Amsterdam doesn’t like its reputation as a Magical Drug Wonderland and wants to instead attract richer tourists from Russia and China. (I think this is utterly foolish, but I’ll save that for a drunken rant later.)

If you do come to do drugs in Amsterdam (or any other city, for that matter) for some guilty pleasures, here are some things to consider before doing drugs in the Netherlands. 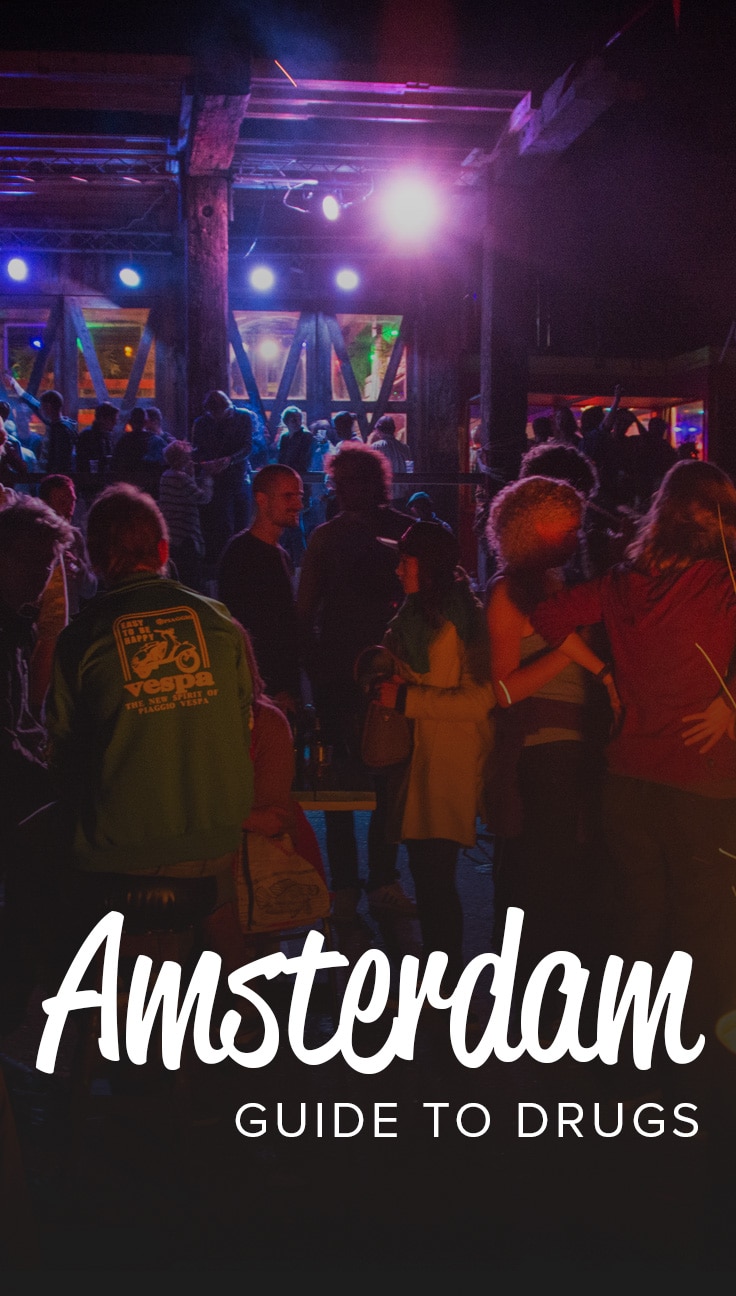 A guide to drugs in the Netherlands

What drugs are legal in the Netherlands?

Before we begin, it’s good to know what drugs are legal in the Netherlands.

For all intents and purposes, weed, hash, and truffles (basically magic mushrooms) are legal in Amsterdam and the rest of the Netherlands. They are readily available in coffeeshops (weed and hash) or smart shops (truffles) for anyone who is 18 years or older. There have been talks to create a membership program for coffeeshops in border provinces, but for now, foreigners can easily come to the Netherlands to buy these drugs.

Other drugs, such as cocaine, XTC, DMT, acid, and basically anything else, are not legal in the Netherlands. However, most of these are still easily available in major centers such as Amsterdam and Rotterdam, and drug use is not a punishable offense.  Police are looking for major drug dealers, not for someone taking a pill at a house party. Having said that, if you get caught buying or taking drugs, your drugs will be confiscated and you could be given a fine.

Many people seem to think that drugs are only legal in Amsterdam, of that there are separate drug laws for Amsterdam, but this is not that the case. Although there are some municipalities that have different rules, for all intents and purposes drug laws are more or less the same in the entire country.

Below we will go deeper into what popular drugs are available in the Netherlands, and how to take them responsibly.

Weed is… sort of legal. The laws are strange in the Netherlands: weed is legal to possess and the coffeeshops are allowed to sell it, but they’re technically not allowed to buy it. Never you mind, though–you’re allowed to have up to 5 grams of weed or hash on you at once.

Going to Amsterdam for some hedonistic purposes? Check here to find the best accommodation in Amsterdam! Try to resist drinking and smoking simultaneously… unless you really just can’t help yourself. Some truffles from a smartshop in Amsterdam The cities are a clusterfuck, and more overwhelming than you may realize. Nature, on the other hand, is peaceful (usually), and less filled with buzzkills. The signs erected all over Amsterdam after white heroin was sold to tourists as cocaine.

Prescription drugs in the Netherlands

Unlike in some other parts of the world, prescription drugs aren’t super popular in the Netherlands. This probably has something to do with the fact we can get real drugs quite easily, and don’t have to resort to over the counter speed for our highs. Doctors are also much less likely to prescribe strong opioids for minor ailments, so many people never get into contact with prescription drugs.

Pharmacies are also very strict when it comes to selling prescription drugs. No drug store in the Netherlands will sell you Xanax or Adderal without a legitimate prescription. Having said that, if you find a reliable dealer they might be able to hook you up, but it’s probably easier to find drugs like cocaine or XTC than it is to find Xanax or prescription drugs.

The possession of small quantities of drugs in the Netherlands won’t be prosecuted. The police are not looking for users, they are looking for producers and large dealers. Below you can find a useful table, provided by the Dutch drug information provider Jellinek.

If you cooperate, the police will just confiscate your drugs and send you on your way with a warning. If you’re carrying more than the allowed amount, the police will consider it a commercial quantity, and you’d better lawyer up.

There you have it: a quick overview of the most important things you need to know about drugs in the Netherlands. Have fun, but don’t forget to stay safe, too! If you have any more questions, feel free to contact us. (No, we can not actually get you drugs. Please stop asking.) Looking to get into a bit of trouble in the Netherlands? Don’t miss King’s Day in Amsterdam, the greatest (and messiest) Dutch holiday!

Yay transparency! This post contains affiliate links. We’ll get a small commission at no extra cost to you if you purchase something through our links. It’s how we cover the expenses of running the blog! Never fear, we actually use what we recommend.

35 thoughts on “So you want to do drugs in the Netherlands?”

TPLUG IS A SCAMMER. MARK IS THE T IN HIS B*TTPLUG. AVOID THIS GUY you have been warned.

How hard is it to get decent coke in Amsterdam? and are their legitimate sources? I DO NOT want to accidentally get Heroine

Where is a good place for research chemicals whilst over there, and what about the law on them if your caught in possession.

THIS WAS SO USEFUL!!! THANK YOU SO MUCH!

How many names sjaak , Attila, mr flaks. A pound to a penny you are also Stacey. With the nice review.